Good morning, believe it or not - but we got some good news in store. Let’s explore! 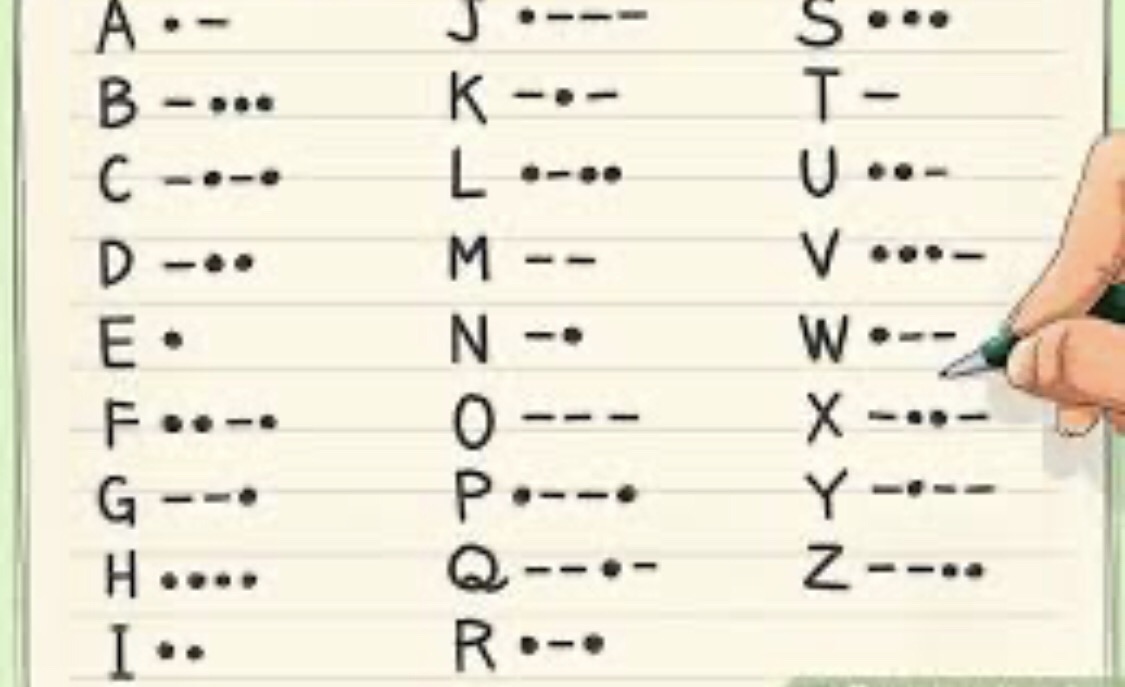 This “With Google” website and app have made it extraordinarily easy to learn Morse code—and some users have claimed they have picked up the skill in as little as 15 minutes.

For the last eleven years, With Google has featured thousands of digital experiments and online projects for the world to enjoy, a number of which are now being added to a Coping With COVID-19 collection—including the Morse Code app.

The app uses visual cues to associate each letter with its respective sound and code—and it’s totally free to use.

So if you don’t feel like committing the necessary time and effort to learning a foreign language, then maybe Morse code might be the next best thing.

You Can Now Tour 2,500 World-Famous Museums From the Comfort of Your Own Sofa

If you have suddenly found yourself confined to your home during the COVID-19 shutdowns, Google has launched an ingenious new service that allows art lovers to get their culture fix from the comfort of their own home.

Google Arts and Culture has partnered with more than 2,500 museums and galleries around the world in order to offer virtual tours and online displays of their collections to internet surfers.

The “tours” allow users to wander through the interiors of the world’s most famous museums similarly to the Google Street View feature. Users can also download Google’s free Arts and Culture iOS or Android app for a much more immersive museum experience.

The tech company has partnered with such prestigious institutions as the Musée d’Orsay in Paris, the Rijksmuseum in the Netherlands, the J. Paul Getty Museum in Los Angeles, the Uffizi Gallery of Florence, and the Guggenheim Museum in New York—just to name a few from Google’s top ten shortlist. Read more here.

Bill Gates has just announced that he and his foundation are accelerating the COVID-19 response effort by building factories for all seven of the most promising vaccines currently in development—even though only one or two of them will likely be produced.

Gates discussed the initiative during his at-home interview with The Daily Show’s Trevor Noah this week.

“Because our foundation has such deep expertise in infectious diseases, we’ve thought about the epidemic, we did fund some things to be more prepared, like a vaccine effort,” Gates said. “Our early money can accelerate things.” Read more here

This Penguin swims 5,000 miles every year for a reunion with the man who saved its life 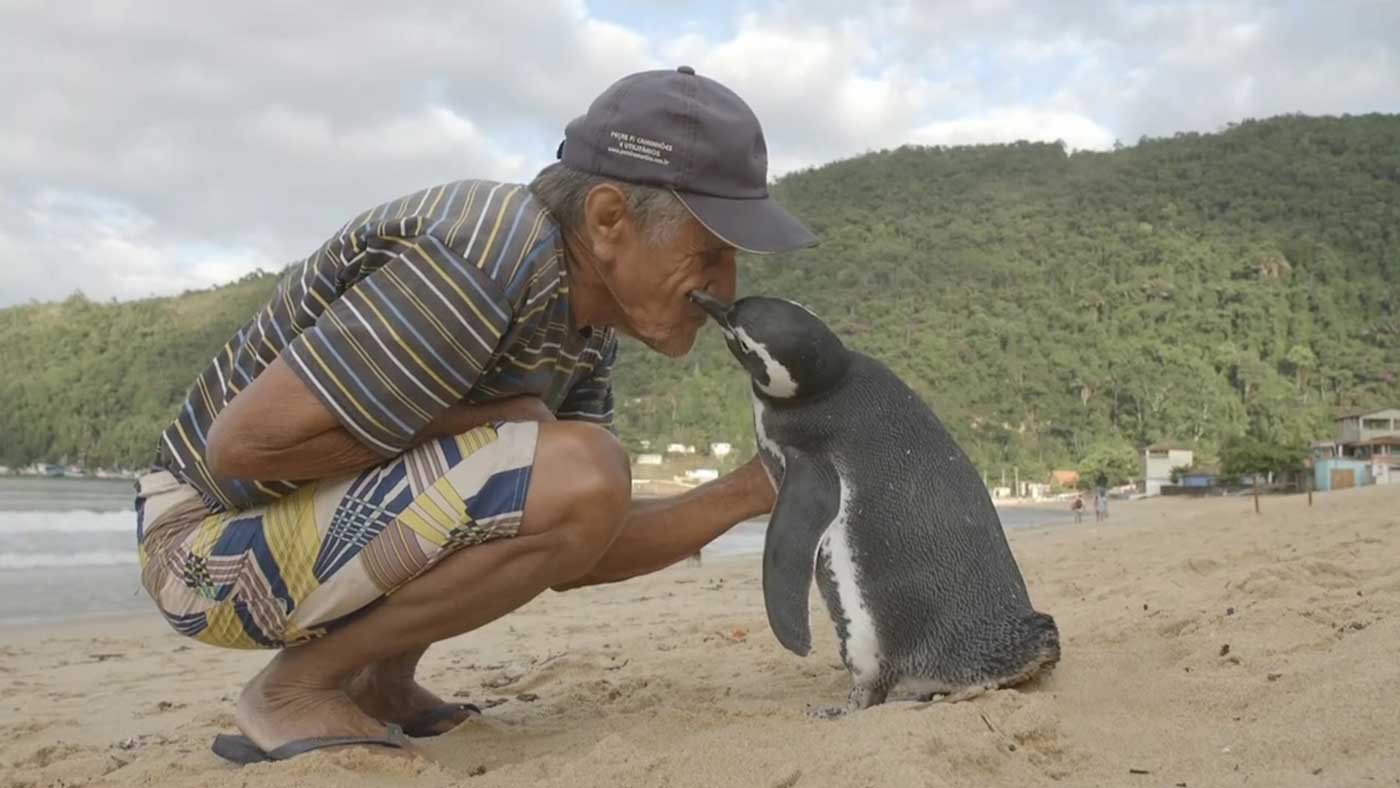 Each year Din Din spends approximately eight months with Joao and is believed to spend the rest of the time breeding off the coast of Argentina and Chile. This little South American Magellanic penguin swims 5,000 miles, to a beach in Brazil, every year in order to be reunited with the man who saved its life. It sounds like something out of a fairytale, but it’s true!

The penguin was covered in oil and running out of time fast. Joao rescued the penguin, naming it Din Din, cleaned the oil off its feathers and fed him a daily diet of fish to rebuild its strength.

After a week of rehabilitation, Joao attempted to release the penguin back into the wild. However, Din Din had already formed a family bond with his rescuer and wouldn’t leave.

“He stayed with me for 11 months and then, just after he changed his coat with new feathers, he disappeared,” Joao recalls.

The little guy wasn’t gone long though and just a few months later, he was back at the same beach. He spotted Joao fishing and followed him home, staying with him for the rest of the year.

Amazingly, this cycle has continued over the past five years; each year Din Din spends approximately eight months with Joao and is believed to spend the rest of the time breeding on the Patagonia coasts of Argentina and Chile.

“I love the penguin like it’s my own child and I believe the penguin loves me,” Joao told Globo TV. “No one else is allowed to touch him. He pecks them if they do. He lays on my lap, lets me give him showers, allows me to feed him sardines and to pick him up.

“Everyone said he wouldn’t return but he has been coming back to visit me for the past five years. He arrives in June and leaves to go home in February and every year he becomes more affectionate as he appears even happier to see me.” Source: AdaptNetwork 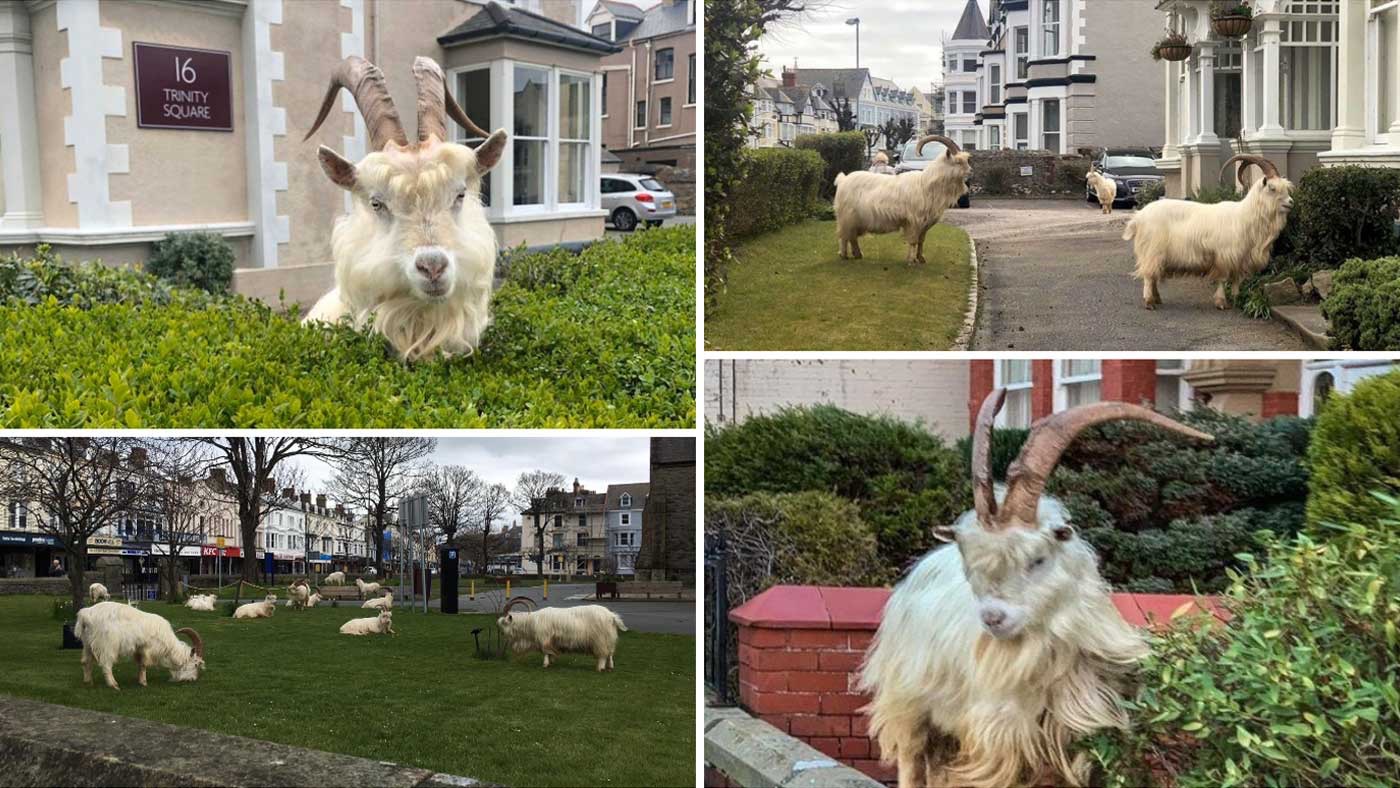 Taking advantage of town's deserted streets because of the coronavirus lockdown, the Llandudno goats have even been branded vandals for munching through gardens.

As town and city streets become quieter, during the coronavirus outbreak and subsequent lockdown measures, people from around the world have been taking note of a ‘silver lining’ courtesy of Mother Nature.

On a positive note, at least nature is returning to our cities,” says author Robert Woodshaw, who shared the footage of the boar family on Twitter.

Now, similar scenes have been filmed in the UK. Two days ago (March 30), a herd of mountain goats ‘invaded’ the Welsh coastal town of Llandudno, on the edge of the Snowdonia National Park.

It’s not uncommon for the wild herd of about 122 Kashmiri goats to venture from the Great Orme Country Park into the town during bad weather. However, as Llandudno resident Andrew Stuart explains, they are normally only seen in the quite back streets and are skittish around humans.

Dolphins are seen swimming in the canals Of Venice, Italy

Amazing story of a dog that rescued humans

When three climbers became stranded on Mount Hood, Oregon, US, their survival depended on a black Labrador named Velvet.

The climbers had set out on a cold but clear Saturday with a group of  friends from the Portland, Oregon area for a weekend trek to tackle the state’s tallest mountain. The ascent went to plan but on reaching the summit, a storm blew in and soon, it was snowing heavily.

One of the party, Trevor Liston, could only watch on in horror as his friend Matty Bryant along with two other team members and Bryant’s dog Velvet, slipped and disappeared over an icy ledge. Liston and the remainder of the team tried to locate their companions to no avail, and it was not till the following morning that Portland Mountain Rescue found the missing climbers. Rescuers are certain that it was the dog’s body heat that saved the climbers lives, as they hunkered down for the night in 70mph winds at more than 11,000 feet. Source: AptNetwork

While the building has yet to be completed, we still are wowed by the idea that a 400 foot-tall skyscraper has a working 350 foot-tall waterfall built into its facade. The Liebian International Building is being built in Guiyang, China. Sadly, they can’t run it all the time.

Take a tour of the beautiful and serene Seashore Library, which sits along China’s Bohai Sea near Nandaihe Pleasure City. Architect Dong Gong’s design was designed to provide each occupant of its reading room with an unobscured view of the beach outside, and a sense of peace and solitude for each visitor. Source: TheAwesomer 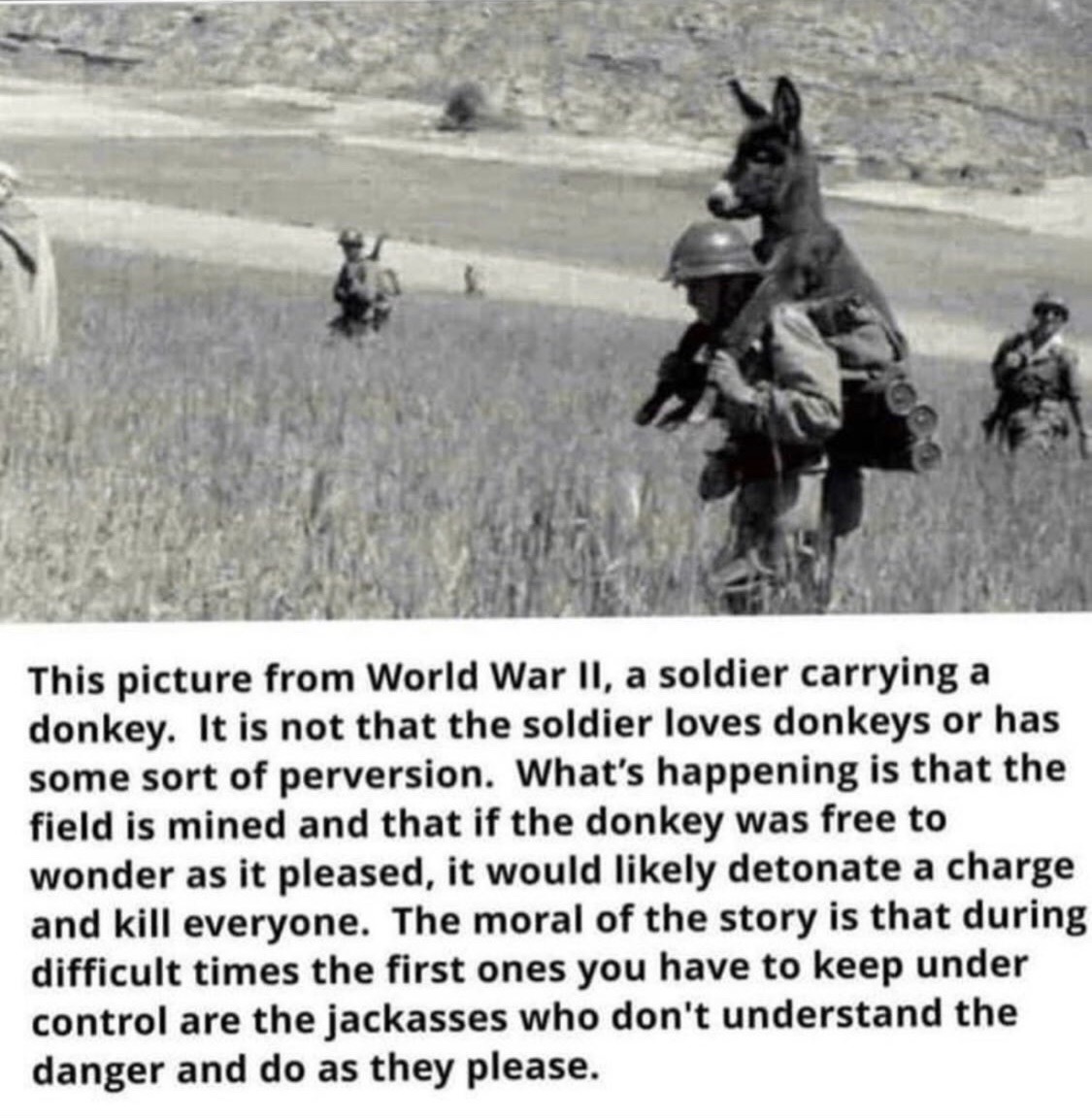 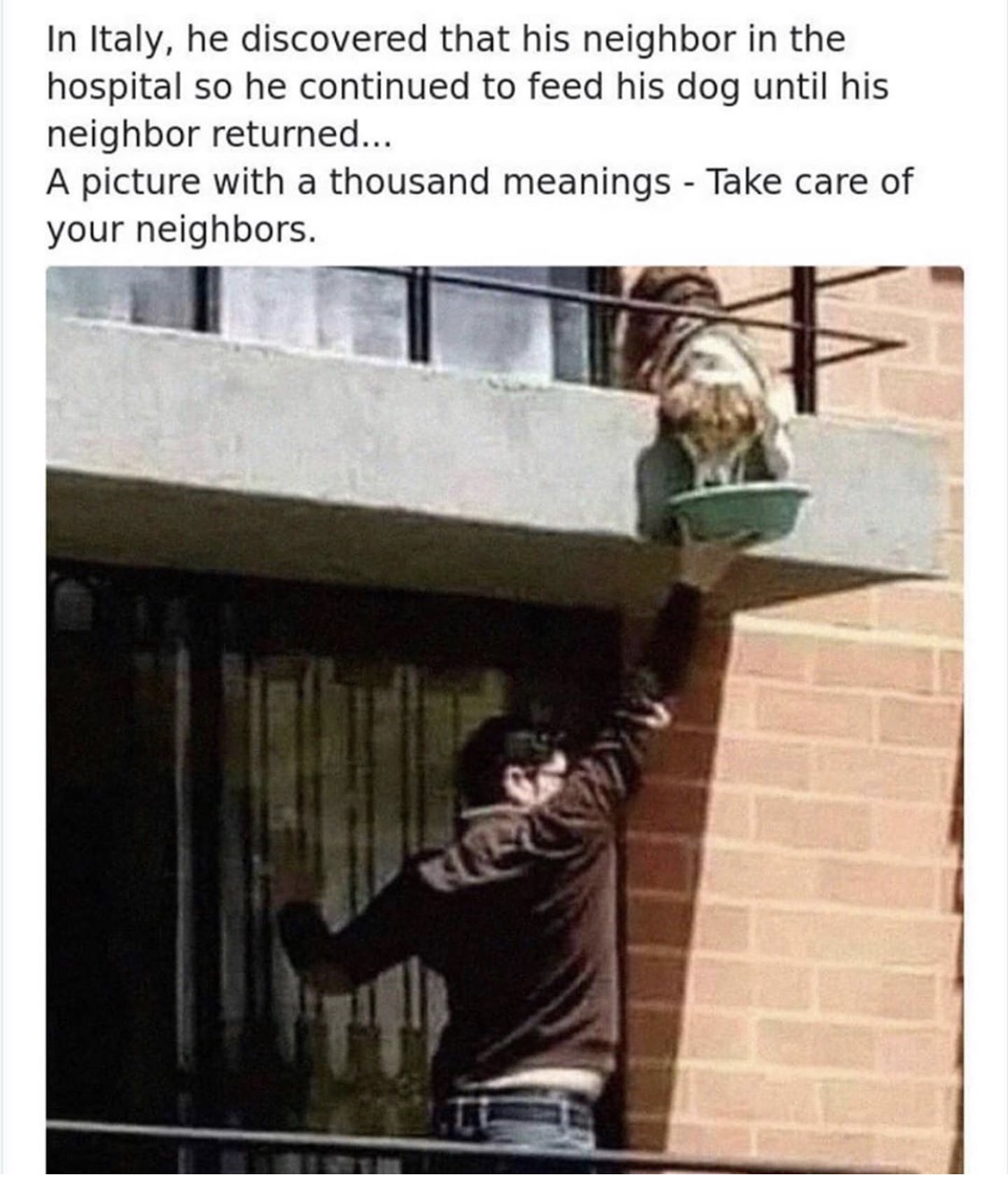 MESSAGE OF THE DAY

Gratitude is essential to be able to see the situation from a broad perspective. I know people do compare the current pandemic to the World War II, yet being blessed by having grandparents who lived through these horrendous times, I need to point out the main difference - safety. When we come home and stay home we find safety and don’t need to worry about being exposed to the “enemy” if we take necessary precautions. During the times of war people couldn’t feel safe anywhere. There was no time where they could be certain that if they go to bed nothing will happen to neither them nor their loved ones. The same applies to any war zone on the globe in today’s world.

So my point is, let’s see the positive side of the story and force ourselves to feel grateful for the conditions we live in accepting that what we have is not the absolute worst. Yes, our freedoms are limited, but we still have them. And that is the most important factor. Please stay, if not optimistic, but hopeful. As the great Maya Angelou said: “Every storm eventually runs out of rain“ and this one will do too.

Protect yourself and those near you and please be well.